The Cham Issue: How Albania turned Nazi collaborators into victims 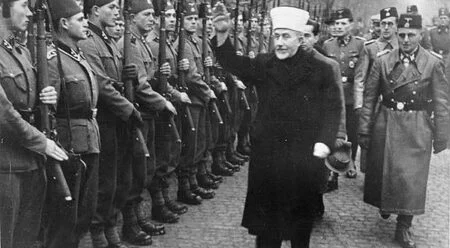 In the past decades, the Albanian state and its institutions have waged intensive lobbying for what they call “The Cham Issue”, in which they accuses Greece of committing a genocide in the aftermath of World War II when in fact quite the opposite is the case.

What’s behind these baseless claims and why is it extremely dangerous to buy into this type of Albanian revisionism?

During World War II, when Greece was occupied by Italy, Germany and Bulgaria following the invasion of 1941, everyone wanted to get their share out of the suffering country.

Among those opportunists were the so called “Chams”, a Muslim minority population that lived in north-western Greece and co-inhabited an area they call “Chameria”, roughly corresponding to the coastal parts of Epirus.

These Chams, driven by ultranationalist sentiments of the other occupying forces promising them a Greater Albanian state, started participating in systematic killings of the local Greek population.

Because of their geographic knowledge of the region, they were of particular value and in their organisation of family clans, formed battalions for more efficient looting, pillaging and burning of entire Greek villages.

In collaboration with the Nazis, they started “Operation Augustus” (from July 29th to August 31st 1943).

In the operation, more than 600 Greek villagers were killed, 70 villages in the region destroyed, more than 500 Greek citizens taken hostages and 160 of them even sent to forced labour in Nazi Germany.

Even the German generals were surprised at the amount of violence and efficiency the Chams showed, with Major Stöckert saying they “performed very well” and gifted them further equipment.

The most horrific episode of the occupation occurred during the so called “Paramythia incident” on 27th September 1943.

53 Greeks were executed and Cham Albanians were part of the firing squad.

This and the surrounding incidents have been thoroughly investigated by Hans Jakob Bickel, a Swiss representative of the Red Cross, who during his visit described the events as following:

“20,000 Albanians, with Italian and now German support, spread terror to the rest of the population. Only In the region of Fanari 24 villages were destroyed.

The entire harvest was taken by them.

In my trip I realized that the Albanians kept the Greeks terrified inside their homes.

The Greek population of Igoumenitsa had to find refuge in the mountains, the Albanians had stolen all the cattle and the fields remain uncultivated.”

After both Nazi Germany and Fascist Italy were defeated towards the end of World War II, the Cham Albanians lost their protecting masters and were quickly defeated by the Greek liberation forces of EDES, led by Napoleon Zervas.

As Greek forces entered the occupied territories to free their population, reprisals began against the Albanians, sometimes even resulting in revenge attacks and the expulsion of Chams.

This is what propagandists are now trying to exploit as a “genocide”.

However, many Albanian Nazi collaborators and war criminals already fled to Albania as they feared being prosecuted for their atrocities; thus many crimes remain unpunished to this date and the Greek population completely non compensated for what they endured.

It is not only ironic but also impudent and brazen when Albania accuses Greece of a “genocide” or the Greek state of being “Nazis” when in fact they were the ones collaborating with the Nazis and waged large scale destruction and massacres.

It is also a distraction from the real humanitarian issue of the region – the suffering Greeks in Northern Epirus (Southern Albania) whose numbers continue to decline due to racist attacks and discriminating policies that continue today from the Communist Era.

Pushing the so called Cham Issue as a national priority also has an irredentist character for Albania, as north-western Greece (Epirus – “Chameria”) is part of the Greater Albania concept.

Ever since the Kosovo War, the idea of Greater Albania has resurfaced, not only in Albanian ultranationalist circles but in the Albanian public in general (most of whom support the irredentist idea) which led to violent outbursts.

These include the 2001 Insurgency in the then Former Yugoslav Republic of Macedonia when local Albanian rebels waged a guerrilla war against security forces.

In the 1990s, inspired by the “Kosovo Liberation Army”, Albanian immigrant rebels started forming the “Liberation Army of Chameria” inside of Greece as a paramilitary terrorist formation.

The group was only small in numbers (around 30-40 according to Greek intelligence) and never posed a significant threat to Greece, but it shows the potential risk to territorial integrity and how important a strict stance on the Cham Issue is.

One should never allow the events during World War II to repeat themselves and the Greek population must be protected at all costs.